From tattoo impressions in an Adelaide establishment to an accusation of having made a “pathetic” crack, This Week On LinkedIn was another journey across different topics, sharing some MBA Thinking in an act of academic generosity.

If we haven’t connected on LinkedIn yet, please consider following The MBA School Of MBA Credentials page, and/or connecting with me directly: Professor Sebastian Longsword.

Now, let’s get into my summary of LinkedIn posts from last week, hand crafted for faculty, students, and the general public who might have missed them the first time around.

Matthew Vincenzino, who is a UX and UI Designer at Axios IT, must sport some ink on his person, because that led to him being led out of a restaurant.

I am a little in shock over this, thinking, but for the grace of god, there go I. This is because I was so inspired by Nancy Duarte’s book on presentation design, Resonate, that I almost got a neck tattoo saying: Murder Your Darlings.
By the sounds of it, I should be grateful that my good lady wife stepped in and insisted that this was one of my ideas that deserved such treatment, itself!
I’ll ask my students this week if they’d consider crafting an Ink Map overlay for Google maps, denoting places that welcome people whose bodies are canvases, starting with The Duke of Brunswick Hotel.
One idea I might suggest is adding a visible QR code tattoo that links to Tripadvisor. In future such skirmishes, you could then stand out the front of unwelcoming establishments and make it easy for others to leave instant reviews.

That was one of the best posts I’ve ever read! Also those are some amazing ideas – let me know if they ever come to fruition. 😀

Jarrod Walsh, a sport and corporate MC, was the man on the mic for the National Pharmacies Christmas Pageant, which is a big deal in South Australia. And, from looking at the post, it was a big deal for Jarrod, too. 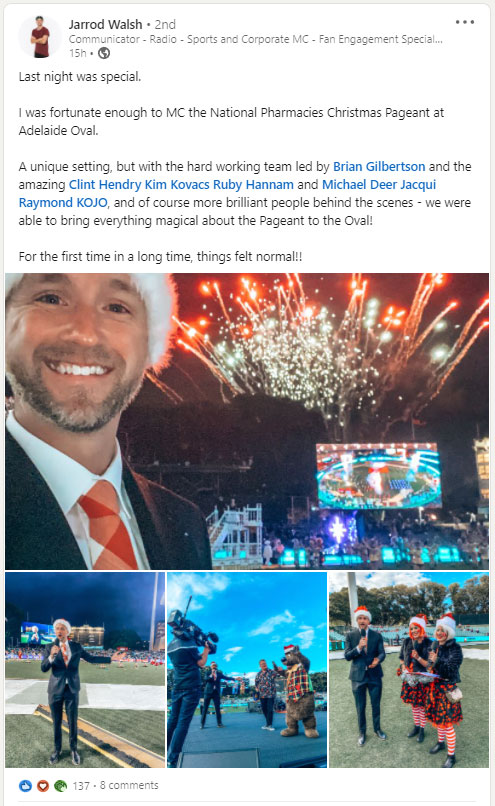 Jarrod’s wonderful post, got my juices flowing and I believe I might have come up with a concept that will boost our tourism sector beyond belief:

A most inspiring post and it has me thinking. The faculty at The MBA School Of MBA Credentials is advocating for SA to become the MBA State but what if we became the Pageant State instead? Imagine if every South Australian had three options of dress code to choose from:
1. The Jarrod Walsh slip-a-Santa-cap-on approach (a benefit for people wanting to just add a touch of pageant while conveniently providing UV protection and hiding bald patches. Our Premier, Steven Marshall, could easily be the standard barer for this approach.
2. The Rachael Horbelt cheeky-elf outfit, brimming with colour and cheer. Heather Croall from the Adelaide Fringe, is so close to this dress standard already, she could lead the charge.
3. Or the Humphrey B Bear pants-are-optional outfit. Some MFS firies could do this, having seen their calendars!
All the South Australian Tourism Commission would need to do is parade images of daily life and then hordes from interestate and overseas would visit, just to mingle with colourful locals. Sir Edward Hayward would be smiling in his grave at the legacy of his pageant!
This National Pharmacies Christmas Pageant-inspired campaign could be just what the doctor ordered!

I think what you see there is evidence of direct, potential, economic benefit from one person’s MBA Thinking application.

Employ people for passion not expertise

Kara Goldin, founder of Hint Inc, woke me up with a start mid-week, with the exclamation that passion crushes experience.

I must say, I was startled at first, and then came around to this concept of trusting people who have big hearts and who mean well, as opposed to experts who might know what they’re doing but don’t necessarily care about us:

This goes against conventional MBA literature but I must confess it can work. For example, when my good lady wife began watching Iron Chef, her passion for cooking with exotic ingredients became enormous and she used me as her sample patrons. Then, when she began watching New Amsterdam, she became intoxicated by the medical prowess of the doctors and started using me as her patient so she could explore her passion for medicine. Interestingly, she’s just told me she has two new shows that she’s deeply enjoying; Dexter and Breaking Bad. The anticipation is killing me … 😉

Isn’t it funny, how someone’s contribution can trigger a chain of thought within yourself? God bless, LinkedIn.

Tamsin Simounds stopped my scrolling with an arresting image of her crouching behind a waterproof sheet, clad in swimmers.

Steve Testar from Showcase SA, kicked of a small threaded conversation, which I seemed to have poured cold water over:

LinkedIn News and a “pathetic” crack

LinkedIn News has been running a poll, asking if it is okay for managers to contact staff out of office hours: 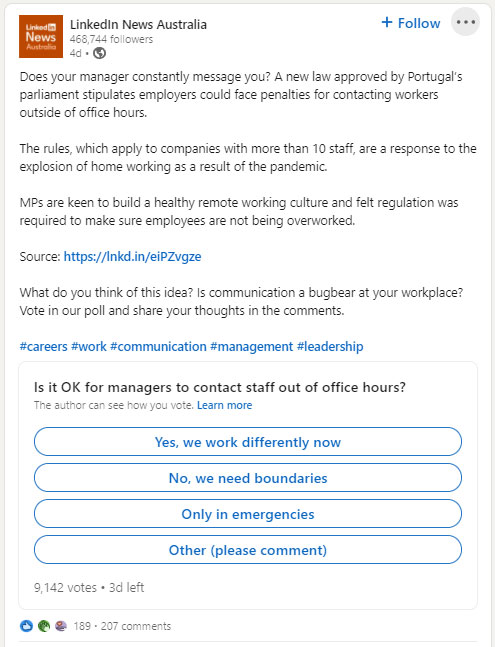 To which, I replied:

I’d simply say to a manager I will answer your messages at any time if you’re fully vaccinated. That would weed out the cranks 😉

Sebastian Longsword If you are having a crack, it’s a pretty pathetic one!!

On this occassion, it seems we didn’t end up with the most edifying of LinkedIn conversations, but we did contribute some ideas into the swirling cauldron of public opinion.