It’s been another fascinating week on LinkedIn, so this TWOLI (This Week On LinkedIn) update is bound to have something for everyone, including a fascinating insight into the success of 9 News  Adelaide.

These digests of my weekly LinkedIn updates are produced primarily for faculty and students of The MBA School Of MBA Credentials, so they don’t miss out on some of the inspiration that strikes me while I have it in my hands each morning.

Also, my TWOLI updates provide an example of what it is to apply MBA Thinking in daily life.

I was thrilled and inspired by Sean’s frankness about how success is measured in the media, whether it’s involving news or people getting nude together in reality television programs (so I’m told). So I replied to him:

I do love this post. When you apply MBA Thinking to business and media, you know that stations have newsrooms not for news, per se, but for content to bring people in to watch the ads. Oh, and pesky licence requirements.
So this is good to have Sean O’Brien call a spade a spade and rejoice in the advertising success of the news.
I’d only make one correction. The third paragraph should read:
In such a massive year for news, it’s fantastic to know that our audience, which is right in the sweet spot for advertisers in this market, continued to turn to 9News Adelaide for their ads.
Now we just need the The Walkley Foundation for Journalism to get with the times and create an award for News Story That Generated The Most Sales.
I’m pretty sure Australian Broadcasting Corporation (ABC)‘s Media Watch would actually be right on board with this, and they’d celebrate the honesty.
Here’s to more transparency in 2022!

Those of us who see the world through the lens of MBA Thinking find Sean’s comments refreshing and matter-of-fact but I do appreciate there are some viewers who still think TV news or the journalism in the newspapers they buy, is being produced for the noble end of uplifting and informing citizens. It’s not. The talk about ‘latest news’ and ‘staying informed’ is what we need to do re the fourth P of the 4 Ps of Marketing, Promotion, to get eyeballs to media content. One wonders if the media landscape will ever develop to the point where that truth is spoken of freely in station and newspaper promotions? At least Sean has taken a bold step in the right direction.

How many rounds of interviews should job applicants endure?

Daniel Abrahams seems to have touched a nerve with LinkedIn users, when he ran a poll on how many rounds should job interviews include? 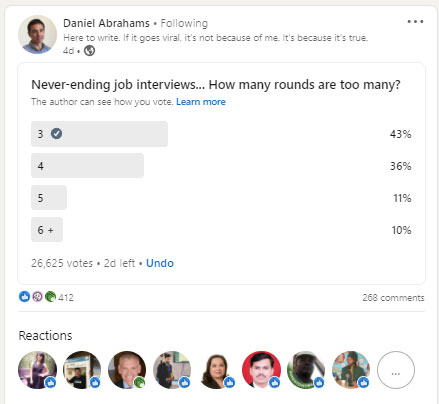 I believe Daniel is right to ask this question because it can be a form of cruel and unusual punishment for both candidate and interviewer, if the application process is drawn out too long. This prompted me to give Daniel an insight into our position on the matter:

We limit ours to two rounds of interviews and then if we cannot decide between two candidates, we call them both in to play a best of three contest on the refectory table tennis table. Our visiting History professor wanted us to institute duels, but our cleaning fees went through the roof. Plus, it’s not very becoming of an enlightened business school; such brazen vulgarity belongs more to law schools.

As you can see, MBA Thinking brings clarity and efficiency to any situation.

A font can make all the difference

A wonderful post from LinkedIn News Australia, got many of us thinking about fonts.

Well, a font can make all the difference between stating your position or being tuna shamed. 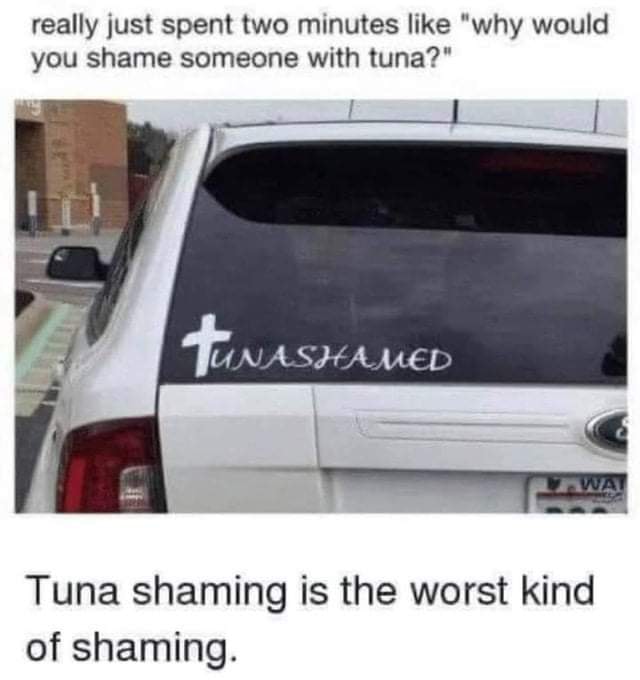 And my utterance seems to have impressed fellow LinkedIn user, Ray Clarke, who responded:

Note to self: Put out a memo about the use of pungent foods in the school kitchen.

Let’s do something we suck at

Finally, a provocative post this week from Jordan Davidson got me and many other LinkedIn users keen to ponder what we’re not good at. Here’s his post:

Luckily, Jordan’s post found me while I had a few moments to ponder, resulting in this contribution:

This is an intriguing idea even though political leadership here and around the world shows there are many who practice this every day.
But what would I suck at? Fiction writing.
I’d spend one day a month dedicated to writing a novel.
My story idea? There’s a central character who is an MBA School professor obsessed with Philip Kotler (a figure in many marketing textbooks who coined The 4 Ps Of Marketing). This professor stalks him all over the Internet and even tags him in comments. Meanwhile, the professor falls victim to a rare addiction; he suddenly craves drinking the ink in ballpoint pens. He then starts stealing from the school’s stationery cabinet to feed his habit while brazenly setting up class projects in which students are to devise theses about how to cure this condition, causing tension and complaints because they’re meant to be studying Business not Medicine. In desperation, the professor declares there are now 5 Ps of Marketing, Pens, to justify his crusade. For a sub plot, the professor’s Good Lady Wife, starts having an affair with a sales manager from BIC and when the professor finds out he gathers sordid images of them and blackmails the man to supply him with bulk ink. Now I need a happy ending. Ideas?

It was heartening to have Jordan then respond:

I thought the 5th P was the happy ending!

A happy ending, indeed. Now I need to hunt for a publisher!